This year, celebrating theatre hits different, and while we collectively acknowledge how fortunate we are to be returning to to our stages during this ongoing Covid-19 pandemic, this World Theatre Day, in the wake of the Mariupol theatre bombing, Teatru Malta have chosen to honor the memory of the theatres that have been ravaged by war and time, theatres that deserve to be celebrated and remembered …

On the 16th of March 2022, a bomb hit the Donetsk Academic Regional Drama Theatre, splitting it in two, leaving it in ruins and killing a total estimate of 300 individuals. As the port city of Mariupol was being razed to rubble by Russian bombs, hundreds of Ukrainian civilians, mostly women and children, went to hide in the grand Soviet-era theatre. 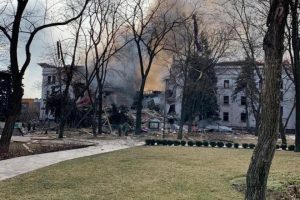 The theatre is among the many Ukrainian heritage and cultural sites to have been destroyed during the 2022 Russian invasion of Ukraine. Mariupol city council officials stated that the theatre was the largest single air raid shelter in the city, and at the time of the attack it contained around 500 to 800 women and children who had sought shelter in the theatre.

During World War II, countries on both sides of the fight destroyed a number of important cultural sites in Europe and Asia. In 1942, the Nazi Lufwaffe leveled our own Royal Opera House in Valletta. 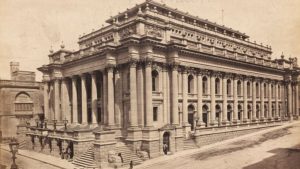 On the evening of Tuesday April 7, 1942 the theatre as it had come to be known was destroyed in an aerial attack by Stuka dive-bombers. Its interior and the majority of its side walls came crashing down with only the numerous Corinthian columns and peripheral hard stone base outliving the attack.

For many years, the Royal Opera House in Valletta served as the go to institute for aspiring opera singers but also as the prime theatrical venue of Malta. This was the place where Military Officers, British Royalty and Maltese enthusiasts came to enjoy staged entertainment of the highest quality, both in the field of music as well as that of drama.

The Royal Opera House was held in the highest esteem and was considered to be one of the most beautiful and awe-inspiring Opera Houses in Europe.

THE GENEVA CONVENTIONS OF 1949 AND THE PROTECTION OF CULTURAL PROPERTY

While none of these sites were intentionally targeted, the response to cultural devastations of this nature were the 1954 Hague Convention for the Protection of Cultural Property in the Event of Armed Conflict. The international community strengthened these protections in 1977 with additional protocols to the Geneva Conventions of 1949. Article 53 of these protocols prohibits “any acts of hostility directed against the historic monuments, works of art or places of worship which constitute the cultural or spiritual heritage of peoples.”

According to these international agreements, targeting cultural sites is a war crime. But that doesn’t mean that military groups have stopped doing it, as is unfortunately the case for the recently bombed Mariupol theatre, yet another cultural institution that has fallen victim to the atrocities of war.

THE BEAUTY OF THEATRE LIVES ON

Today we look to theatres, abandoned and destroyed, not only as a safe space to celebrate our love for the creative and performing arts, but as a sanctuary and safe haven in the face of war and fear. Teatru Malta celebrates the beauty that lies within the derelict and the ravaged, and reminds all those reading, that the spirit of theatre is far more than just a building and something that cannot be eradicated by any form of hate just like these resilient theatres below, all of which continue to mystify even in their most dilapidated state – a reminder that light can be found even in the most dire of situations.

The site was abandoned for more than 60 years and was an old Spanish theatre built by a wealthy merchant in 1913.