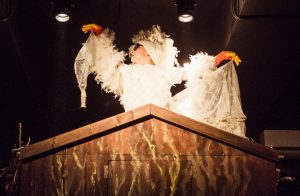 In just a couple of weeks, Trikki Trakki will be coming to a blue box near you.  You guessed right, after weeks of rehearsals, six of our leading theatre directors will be leading six groups of local students as they perform six adaptations of classic texts for their audiences at M Space’s Blue Box theatre in Msida. The idea to re-adapt the likes of Homer’s the Odyssey into a fifteen minute adaptation, in Maltese for children, seemed challenging to say the least; but these were challenges that festival director Antonella Axisa welcomed with open arms. Not only did the directors and their assigned students accept the challenge; they rose to it!

Take a look at what these kids have been working on together with their dedicated directors!

”After the long journey that took place during the most famous battle of Ancient Greece, the hero Odysseus thanks all the gods that helped him. Or rather, almost all – he forgets to thank one of them! What are the consequences of this? You’ll soon find out”

”Based on Julius Caesar and the happenings on the Ides of March, where Caesar is slain by the conspirators. Tal-Ħandaq Middle School are indulging into their first ever Shakespeare. All cast members have in one rehearsal or other played each others’ roles with the intention of gaining maximum experience to the students from this project”

”When 13-year-old Leah plucks up the courage to go on a weekend summer camp alone, she finds herself liberated from her claustrophobic family and well-meaning but bossy BFFs. However a piece of online news forces her to think about her future and the kind of person she’s growing up to be. Is she living her own life, or the life that others expect her to live? ‘Ħares Leah’ captures a brief snapshot in a young person’s life when she realises who she wants to be. Directed by children’s theatre veteran Malcolm Galea, the play is inspired by Chekhov’s ‘Three Sisters”’

”Agamemnon the King is brutally murdered by a large squishy thing at the hands of his wife Clytemnestra. Will Detectives Hudson and Riker solve the crime? Will Zeus defend the murderess? Will the eye witness identify the killer? Will the Medical Examiner have all the forensics? Will Apollo convict the murderer?”

”Don Juan u Sganarelle is a free adaptation of excerpts of Molière’s Don Juan. Don Juan is a man who lives the good life, a serial seducer out to get every pretty girl he sets eyes on, only to tire of his conquest and move on to the next. He is a smooth talker with no morals or principles, while Sganarelle, his faithful valet, who sees right through him, constantly shows him up for what he is through his witty, down to earth and sarcastic remarks. Don Juan ends up chased by women not quite in the way he likes to be.”

The Tempest – A Parody

”One of Shakespeare’s latest works, The Tempest is about the exile of Prospero, Duke of Milan, on a distant island along with his daughter Miranda. The island has been turned into a holiday dream destination in summer. Winter however provides a prohibition due to extreme weather conditions. This is when one winter 12 years after the initial exile, Prospero uses his magic to draw his enemies on the island and … This version has been liberally adapted from a play with the same name by William Shakespeare.”

Trikki Trakki will be staged at MSpace on the 5th of April for schools and the 6th of April for the public. For more information on what’s in store click here.